I guess it is hard to say that I traveled back to the USA, since it was more a matter of returning to the USA because I had to get back to work. That’s such a bummer! But I love what I do so I’ll get over it. I wanted to close out my time in the Philippines with some thoughts, some photos and some music.

So first, I wanted to share a song with you that I really am starting to listen to more and more. I like the words which is rare for me, I normally am working on so many different things at one time that music is really just a background filter I use to bring everything together in my head. I know there are some of you who can totally relate to that concept. Anyways, here you go: Sultan & Ned Shepard, All these roads.

So now that you have my music playing and you’re reading this we can move onto the meat of this post.

I flew Asiana Airlines this trip, mostly because they were so damn affordable. I’ve got to say I was NOT disappointed, especially when stacked against my Korean Airlines experiences. Not saying that Korean is a bad Airline, but I can see why Asiana has such an impressive resume. In fact I’m surprised they were more affordable – but given that whole “plane crash” thing I suppose maybe they’re trying to entice wary travelers back into their good graces.

The customer service on the phone when I was booking my seats for the trip and, more importantly, in person when I was with them for the flights was top notch. But that really is a signature of Asian airlines no matter the point of origin. Hands down, I always will fly an Asian carrier over an American one any day of the week – and it boils down 100% to the service I get, even back in my seat in coach.

The Flight was SEA to ICN to MNL and back again. The seats were actually pretty comfortable for flying coach…err…excuse me…economy. Or as Asiana calls it, “Travel Class”, which struck a note with my wandering heart. They felt noticeably more spacious than the ones on Korean did, and I felt they were more comfortable. I flew on the Airbus A330-300. The part I was worried about was the in flight entertainment. I can sleep anywhere (Read: Craters in Iraq) and wanted to know if I would need to bring some sort of entertainment on my own devices. The reviews I read were a few years old so hopefully the webcrawlers pick this up. The screens in economy were the same size as the screen on my iPad2. Touch sensitive. And hosted a generous sampling of American movies for travelers to watch. 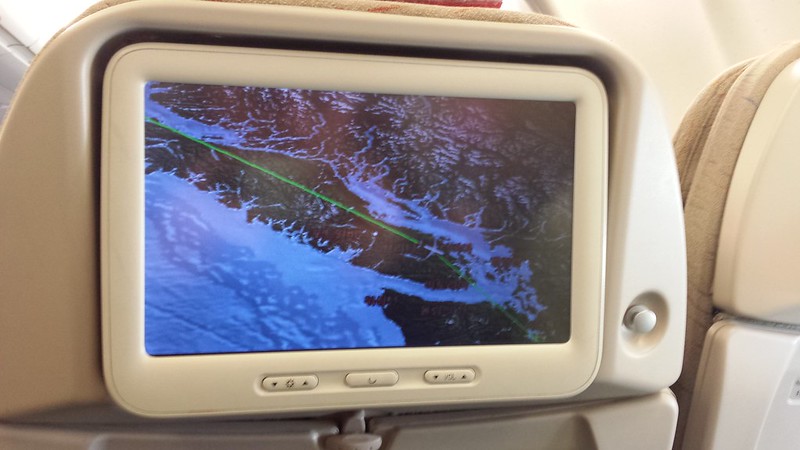 So I was pretty happy with that. Especially on this flight, my “turn around” flight when I try and stay up as long as possible to kickstart my fight against jetlag. Aside from some compounding schedule issues on the America to Manila portion of the trip (the planes were ALL late, so all other flights were late) I really have no complaints.

Food was really good, I ate western meals and felt as though they were as good as any I’ve had in business class – minus the fancy china. That and the complimentary drinks make for a great dining experience. The Flight Attendants are composed, courteous, and accommodating – very much a signature of Asian carriers. My sister, who traveled ahead of me by a day or two, ate Korean meals and loved them. So the food is up to snuff.

Had a really cool surprise waiting for me in America when I got there. I filled out one of those customs forms for NO REASON. Or…immigration forms. Whatever. The blue one. When I showed up there was a surly Customs Agent directing all of us with American Citizenship and Passports to one side of SEATAC’s immigration hall. All foreign nationals had to go the old fashioned way – up to windows and agents to in process. Not we Americans (and Canadians – that’s cool!). Instead we were sent to several rows of self serve kiosks, we scanned our own passports, verified our trip details, and then took a photo of ourselves. Once all that was done a slip printed out with all that info on it. You take that to an Agent, they look at it and then let you into baggage claim. It was really cool! And a bit spooky too…that machine knew a lot about where I had been.

So…no photography signs MAY have been in the baggage claim but I didn’t see any in the new kiosk area, all the same I didn’t want to get seen snapping a shot. Sooooo I pocket shot with my cell phone to try and share this coolness with you. Dear NSA…don’t flip out. It’s blurry as hell. It’s the thing that has two green lights on the side. That’s how you know the Kiosk is open and you can leave the line. I’d wager this is gonna save American’s a lot of time and money while simultaneously pissing off the Immigration Officer’s Union…if one exists. Hello robots!

So any of you that know me, have probably heard me gripe about the customer service disparity that one experiences coming back to the United States. It seriously is a jarring kick in the teeth every time I get back. It’s very possible that we are a bunch of assholes and that is why the world thinks that. I know – big generalizations there, but damn people. It’s bad. From the very first Customs Agent encountered to the barista in my connecting flights terminal. A noticeable and distressing fall off in the quality of customer care.

I love being in foreign countries, especially asian countries. They place so much emphasis on customer service and everyone, from the guy opening the door to the guy driving the car, to the food handlers that are bringing you meals, is respectful and kind. It blows my mind! How is this not the standard in America? It used to be, but people don’t really respect the fact that we have it so damn good in this country and that having a job is still a pretty remarkable thing. Go international and you’ll see a work ethic and gratitude that is long since missing from the American service industries. Ugh. I won’t linger on this too long – I just really hate being so disappointed every time I come back here. People are so bitter, and rushed, and stressed, and angry, and they take it out on the people they meet. The place that shouldn’t happen is at your place of work. You are LUCKY not ENTITLED to that job. Don’t make your customers hate you. Americans are really good at that though.

I know that this isn’t true of everyone in the field, and may not be even true all the time for the one’s I’ve encountered. But 100% of the time I return to this country I have to contend with it. So it is not imagined. Are we too far gone to fix it? Frankly, probably. We’re pretty spoiled – and we act like it. That’s the rule now – and thank god there are exceptions to the rule.

Ok…that’s all I’ve got for now. Tomorrow is my last day off before I’m back to work teaching people how to fly helicopters in Moses Lake, Washington. I’m going to enjoy.

Nick Henderson is an FAA rated commercial pilot, world traveler, blogger, podcaster, photographer, and all-around good guy. His love of travel, adventure, food, and fun has taken him around the world and back again. View more posts